The organisers of the Pontypridd-based international Poetry Book Awards have announced the winners of the 2021 contest.

Congratulations to Jenny Mitchell for her collection ‘Map Of A Plantation‘.  Chosen by our judge, famous Welsh poet Mike Jenkins as this years winner! 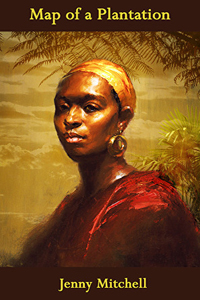 I have to say that judging this poetry book competition has proved a huge challenge, but one which became enormously rewarding.

That’ll be no consolation to those who haven’t won of course, but as somebody who has failed in more competitions than pubs I’ve been to, I can sympathise.

Really, it might have been fitting just to announce the top 5 in no particular order, but I have been entrusted with the task of finding a top three in order of preference.

Naturally, judging any competition is a matter of the judge’s own taste, yet I like to think that mine is a very eclectic one and that my spell as editor of Poetry Wales illustrates this. However, as co-editor of Red Poets for 28 years I do have a liking for ones with a political or social inclination.

The two books which almost made the top three certainly fit the latter: Roger Elkins’ The Leading Question’ dealing with the Irish famine with much sensitivity and the environmental, feminist resistance of ‘Swerve’ by Ellery Akers.

In the end, I chose three exceptional books which are very different from each other.

In third place is Kathy Miles’ The Bone House’ , so close to the earth and animals, yet equally in touch with mythology. A perfectly-wrought collection which deserved to be on the Wales Book of the Year shortlist, Miles’s imagery startles and amazes, yet is never deliberate or strained.

In second is Fiona Perry’s Alchemy, always in touch with the natural world and subconscious, Perry manages to make the most mundane things into something magical and sacred , so you become part of a greater being : a pagan force not distant deity. In ‘Wildfire’ she could so easily create an apocalyptic vision, yet despite all the ending is one of rebirth.

And so, to the winner…..’Map of a Plantation’ by Jenny Mitchell, a book which reminded me very much of one of my favourite novelists Andrea Levy.

What I love so much about this are the many distinctive voices she adopts, to bring alive the sheer degree of torment and terror endured by both slaves and servants in the Jamaican plantations.

Here too, however, there’s ultimately a sense of hope, with a final more autobiographical section where Mitchell discovers a …..‘Forest made of freedom’ amidst all the oppressive history of the British empire.

I’d like to say a big DIOLCH YN FAWR to all those poets who sent their books for this competition.

After spending much of the pandemic reading fiction and poetry anthologies, my faith in volumes of poetry has been fully restored.

To find out more or buy copies of these great books just click the author / title above.